Posted by Pete West over 8 years ago.

This race was going to be the first time I’d opted not to stay somewhere local before a marathon so I knew it was going to be an early start. In my usual OCD state I’d set out my race kit the night before and had my post-race bag (with a change of clothes and some food) already prepared. I made sure I got to bed early and didn’t struggle nearly as much as I was expecting to when the alarm went off at 5:30am and I jumped in the car at 6 to head to Eastbourne. 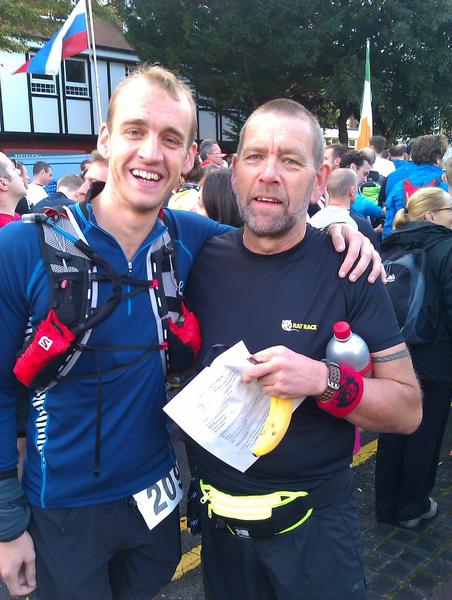 Dad and I at the start line

The organisers of Beachy don’t send out any chips or numbers in advance so you’ve got to get to the registration tent to get everything on the day (or the night before). After collecting all my stuff I met up with some of the BOSH team for a chat then made my way to the start line to be greeted by a massive scream and my sister running at me with her arms waving shouting “it’s my brother, it’s my brother!”. My parents had stayed at my sisters the night before the race and they’d all come to see me at the start line. It was fantastic to see them, I’ve never had a group of people to support me at a race. My dad was running the 10k, due to start 30 minutes after, so we wished each other luck, had our photo taken, and got ready for the off.

I’d been checking the weather forecast every day on the run up to the race and every time I checked it was completely different. Friday night’s forecast said prepare for gale-force winds and although we were sheltered by the school and first hill you could tell it was going to be evil.

After a very muted klaxon we all look at each other to see if that’s the off, decide it must be, then the surge to the first hill begins. This one starts less than 100 metres in to the race, which is just cruel as you’ve got no time to warm up and get in to your stride before you start climbing. It looks like a nice short hill but don’t be mistaken! Just when you think it should finish the course bends round to the right and the hill just goes on. Leaving Holywell behind us, we set off on the South Downs Way towards Willingdon Hill.

After about 2 km I started to feel some spots of rain and wondered if I’d regret leaving my jacket in the car. I had a couple of extra layers stuffed in the back of my race vest but the rain combined with the wind could make it a very miserable day out if I didn’t have enough stuff with me. After a couple of minutes I realised that the rain drops weren’t rain at all but that my hydration bladder had split and was rapidly gushing water down my bum and the backs of my legs, not a pleasant experience at all! Not only did I now have a soggy arse but I had to stop and sort it out and I didn’t even really feel like I’d actually got going yet.

There’s a nice descent from Willingdon Hill to Jevington but it’s not long before we’re climbing again up into Friston Forest.

I’d been trying to treat this event as preparation for much longer races next year so it was a case of taking it nice and easy, stopping frequently, and practising eating while on the move. There’s quite a steep (but short) climb out of Alfriston so I had half a Clif bar and a bit of a chat with Tom on the way up towards Bopeep farm. This section is a steady climb along a ridgeway with stunning views out across the South Downs on both sides. The wind was crazy but everyone seemed to be taking it well, laughing at the craziness of it all as we were being blown around the ridge.

From Bopeep farm it’s a gentle descent for quite a few k so there’s loads of time to recover. I stopped for a hot cross bun and a cup of tea in Litlington (I don’t even like tea but it tasted like heaven as I stood in shelter from the wind for the first time in hours with a hot cup of tea.)

My dad had mentioned he’d try to meet me and run the last 10k with me so I was expecting to see him as I passed Exceat. It was a great mental boost for me in the mid part of the race as it broke the race down in to two sections, knowing I only had a couple of kilometres to go before I saw the family again and then it was just a short 10-12k to go to the finish. I passed through Exceat and was looking about for them everywhere but couldn’t spot them. I pushed on to the top of the hill and as soon as you hit the coast the view just opens up and you can see forever. It was absolutely beautiful and the fierce sea highlighted exactly how windy it was. 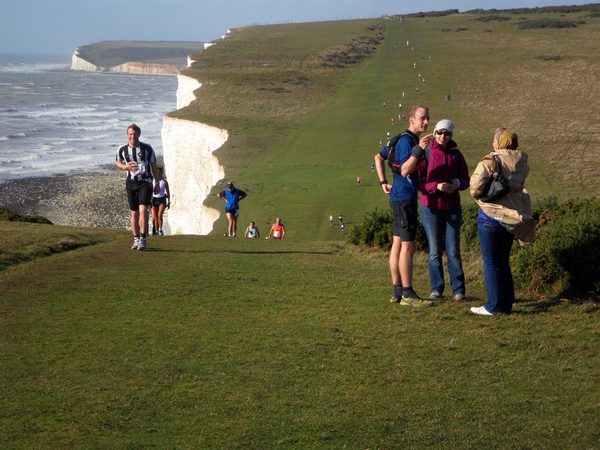 Me with my sister and my mum

From here on in it’s up and down all the way through Seven Sisters Country Park. After giving up on seeing the family until the finish line I was amazed to see them just before Birling Gap, with about 6k left to go. It was a great opportunity to stop and get my breath back from all the hill work.

There’s a slow and steady climb from Birling Gap up to the top of Beachy Head that I found really hard work. As I got to the top of Beachy Head and saw the pub and Visitors centre the marshals were calling out that it’s pretty much all down hill from there. Time to try and pick up the pace a bit for the last couple of k, it felt great to have the legs turning over at speed again instead of being stuck crawling up hills!

I sailed down the last hill in to the finish line, picked up my medal, replenished my Clif bar stock and then went off for lunch with the family and a paddle. Great day!