Posted by Pete West over 8 years ago. 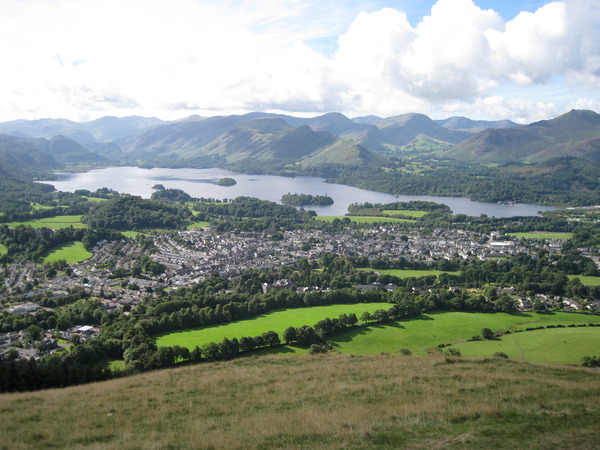 Keswick and Derwent Water from Latrigg

Keswick is a gorgeous little town in the Lakes that I’ve been meaning to visit for years so when I was thinking of places to go for a late summer/early autumn running trip it was pretty much top of my list. Right beside Derwent Water and surrounded by hills it has a reputation for being an ideal walkers destination so it should serve me perfectly to get some hill running and navigation training. I found a decent looking B&B, packed up my gear and set off.

As I was driving towards Keswick the scenery was breathtaking, but what stood out most of all was a massive ridge line connecting 3 or so peaks on my right hand side. I could see people walking across it so I said to myself in the car that this ridge was going to be goal for the weekend. I arrived at the B&B and, in my excitement, got the maps out straight away to start planning. It didn’t take long before I found my ridge had a name: Blencathra, and that the disused railway line from Keswick (now a footpath) would take me almost to the base. The map was a bit ambiguous with footpath markings at the point I wanted to leave the railway but I figured I’d just have to explore.

I’d been in Wales the week before arriving in the Lake District and with three Snowdon ascents in my legs I was looking forward to a rest day with some easy hiking before starting on my running but the weather forecast didn’t want to play. The only good day would be Saturday, the rest of the weekend was forecast as a complete washout and, while I’ve got no problem running in the rain, if I was going to run up these hills I wanted to be rewarded with a decent view when I got to the top! I was more than a bit concerned that my legs wouldn’t be able to deliver what I was asking of them, so I went to bed nice and early to give them as much recovery as possible.

My alarm goes off for breakfast and it’s a bit of a struggle to get out of bed. My legs feel quite tired and don’t really want to move so I decide I’ll head out for a walk after breakfast to try and loosen up and see how I feel before deciding if I’ll postpone my run until the Sunday. I walked from the B&B down in to town for a mooch around the outdoors shops and was buying a couple of running tops in George Fisher when the guy serving me asked what I was doing for the day. I told him about my plan to run Blencathra, and asked if he knew whether the path from the railway line to the base of the climb was well marked. He waved me over to the map desk and we spent about 20 minutes going through different options: plotting routes on the PC and checking ascent profiles. In the end he’d recommended going from Keswick up Latrigg, then heading direct from there to the Blease Fell climb up Blencathra. He even showed me some photos from one of the local walking groups with what to look out for to make sure I didn’t miss a key turning. Fantastic service, and all for free!

Now that I had a route that had been sanity-checked by a local I felt more confident and the tiredness in my legs disappeared. I wanted to make the most of the trip by actually being able to appreciate the views and beauty of the Lakes so I had to get moving that day. I power-walked back to the B&B, got changed as quick as I could, grabbed my bag & running poles and set off. The start of the route up Latrigg is part of the Cumbria Way from Keswick towards Skiddaw, but you hang a right after about 1.5km and climb Latrigg instead. For such a small climb it’s deceptively steep in places and I was very happy I had my running poles with me; so the ascent becomes run a bit, pole a bit, run a bit, and it’s not long until I’m at the summit, looking back over Keswick as the sun breaks through the clouds.

I stop for a few minutes to take in the view then head off down the north eastern slope towards Derwentfolds and then up to the Blencathra Centre, moving through a small wooded area with the gorgeous little stream crossed by a wooden bridge. From the Blencathra Centre it’s not very obvious where to go to find the footpath up to the summit so I stop and ask a couple of the visitors. They have absolutely no idea and look at me like I’m a bit mental. Fair enough, I probably am. 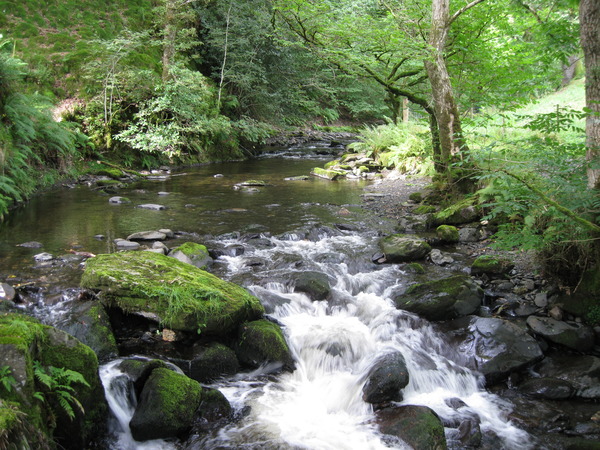 Eventually I find the start of the path at the rear carpark. Luckily I’d been warned by the guy in the shop not to expect the dead-straight footpath that’s marked on the map so I just followed the path heading in the right direction (up) and carried on with my run/pole strategy. My legs were really starting to feel tired from all the climbing and I had to stop quite frequently to regroup. It really brought home how tough the Bob Graham Round is, as Blencathra is just one of the 42 peaks that need to be reached in that 24 hours and I was already pleased to have chosen Blease Fell for my ascent which is definitely the easy way up.

Passing a couple of walkers on the way up, they turn to me and say the path looks nothing like it’s shown on the map so I smile to myself and am very pleased I stopped off at the shop in the morning for some extra info. Once up on the ridge proper it opens out on both sides and the views in all directions are spectacular, unfortunately it also means the wind howls along the top and I have to dive in to the drysack to grab another layer. It feels fantastic to be on the top of the ridge I’d looked up in awe at the day before, skipping from peak to peak as I head for the main summit to stop for a bite to eat.

The peak is packed. I can’t believe it. There’s families with kids, groups of walkers with dogs, and even some blokes with a rucksack full of cans of beer that they’re working through. I eat quickly and move on to get away from the crowd, heading straight across the ridge and descending Scales Fell to pick up the footpath across fields towards the river.

It looks like quite an easy trip back from here so I put the map away to start moving a bit more and sure enough I get lost within about 5 minutes, roaming the golf club looking for the start of the footpath on the disused railway. Getting the map back out of my bag makes me realise I’ve crossed the river a bridge too early so it’s a case of retracing my steps, back over the river, and along the river path for another 800 metres. 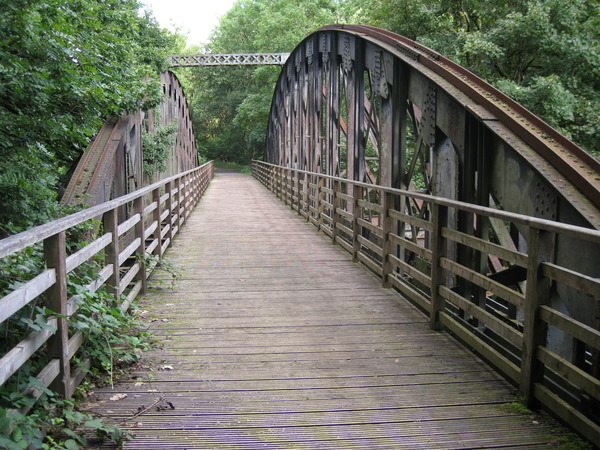 They’ve turned the old railway in to a cycle track but left loads of the original bridges over the river Greta and the tunnels through the hills. It’s only about 7km long but it’s very scenic and nicely flat. After such a hilly few days my legs were very happy to have a flat stretch to open up and I fly back to the B&B on autopilot to get changed and head out for lunch!